SKIN! The Art of Leather and Hide

Please scroll down for links to images, sizes, prices and more information on each object featured in this exhibit.

For those of you who could not visit the gallery during this exhibit, , we present some views of the installation. 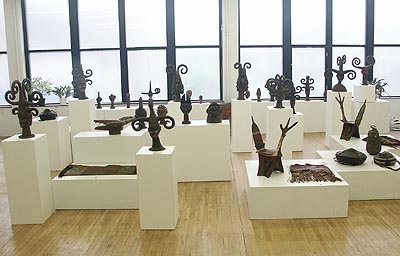 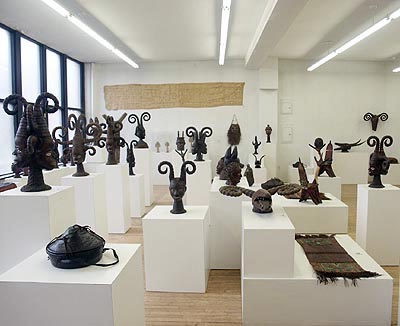 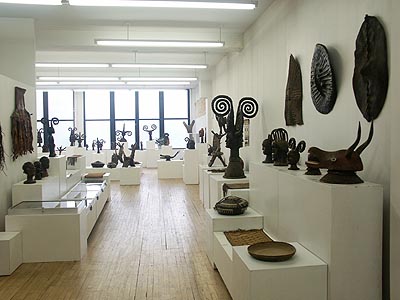 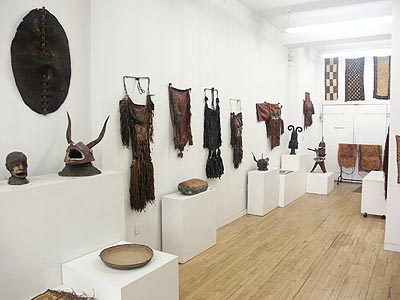 Our late spring show, SKIN!, displays the elegant and imaginative ways in which various African peoples used leather and animal hide to create work that is both decorative and utilitarian.

To western eyes, the most exotic objects are the fantastically-coiffed heads of the Ekoi or Ejagham (Nigeria). Crowned with extravagant horn-like curlicues, these headdresses are entirely covered in leather which lends an odd otherworldly quality to the refined facial features beneath a truly arresting superstructure..

The camel saddles of the Tuareg (Niger) provide another unusual sculptural form on which brightly colored leather, embossed with complex designs and pieces of metal, decorates a whimsically shaped wooden structure whose narrow seats taper diagonally out to elongated forked branches. Leather was the primary material used by the Tuareg as its durability, lightness and flexibility was ideal for a nomadic existence. They fashioned objects, ranging from saddlebags to cushions to tent mats, that were painted and molded, embroidered, engraved and fringed; the resulting riot of detail restrained by the underlying control exercised by these masters of geometric abstract design.

The Ethiopians embellished the leather exterior of their covered baskets with silver tassels and filigree thus elevating these simple shallow containers from the functional to the stunning. Less elaborate but no less attractive are the leather bowls covered with cowrie shells created by the Yoruba (Nigeria).

Examples of leather stitched into ceremonial dress range from the intricate designs of the celebrated beaded aprons of the Ndebele people to the austere robes of the Maasai. Rounding out the exhibit are shields, drums, bags and leather amulets from a variety of cultures.

In the southeastern forest region of Nigeria, the Ejagham (Ekoi) people live in a politically decentralized group of small, scattered villages with with several clans united under the leadership of a priest/chief (Ntoon). A Ntoon is responsible for the ritual activities of the community while the political functions are performed by various societies of elders and age-grade associations of young men.

The important art forms of the Ejagham people are connected with the institution of the Ntoon and with the men's and women 's associations. The best known of these art forms are the large, skin-covered headdresses (crest masks), which may have one, two or even three faces, and the smaller headpieces, which may represent a head or an entire figure.These exceptional headdresses are owned by associations whose members are men or women of the same generation but membership is often further restricted to those who have performed certain feats or are proficient in particular skills. In the past, for example, there were associations of hunters and of men who had killed leopards. The masks, which bear the same name as the society that owns them, are worn during funerals, initiations and other events. Some are startlingly naturalistic and may be portraits of known individuals; others are highly stylized.

There are two principal types of masks: helmet masks that cover the wearer's head entirely and crest masks, often referred to as headdresses, which are attached to basketry caps worn on the top of the head. Both types were made by an artist who carved the form from a single piece of wood and covered it with soft, untanned antelope skin that had been soaked in water for several days. He stretched and tacked the skin into place until it dried and stiffened. Eyes, scarifications, and hair were often carved separately and pegged into the finished piece. Before being worn, the headdress was painted or colored, then adorned with metal pieces, wooden pegs, real hair, porcupine quills, feathers, or feathered rods stuck into holes at the top.

The most distinctive of these elaborate sculptures are the realistic female headdress topped with curled "horns" representing elegant hairstyles. They would have been secured on the wearer's head by a string under the chin, with the body covered entirely by a long gown. These might have been worn by a woman in the context of an Ejagham women's society called Ekpa, which was responsible for the education of the girls in preparation for marriage. The headdress could represent a girl that evokes ideal female beauty and is ready for marriage. The depicted hairstyle was worn during the coming-out ceremony following the girls' seclusion.

The opposing sides of janiform masks (either crest masks or helmet masks) represent male and female faces. The male side was normally stained a dark color while portions of the female side were left the natural lighter color of the antelope skin. These masks would have further ornamented with feathers, quills and other objects in performance.

In addition, the Ejagham fashioned skin covered crest masks that represent imaginary animals: crocodile heads crowned either with antelope horms or with a woman's curled coiffure.

These skin covered heads are striking for their realism and ferocity. Some accounts suggest that they may have originated as substitutes for the enemy skulls which were displayed by warriors at post-battle victory celebrations.

Much of this material has been taken from a wonderful book: A History of Art in Africa published by Harry N. Abrams. The relevant chapter is Cross River by Robin Poyner.

These skin covered figures were worn as helmet crests or headdresses in the same way as the Ejagham heads. The arms and legs are made seperately and can be removed or repositioned.

These camel saddles are formed by stitching and gluing brightly colored leather embossed onto a forked wooden base. The leather was then embellished with delicate drawings, as well as decorative pieces of leather and of metal.

Leather was the primary material used by the Tuareg as its durability, lightness and flexibility was ideal for a nomadic existence. They fashioned objects, ranging from saddlebags to cushions to tent mats, that were painted and molded, embroidered, engraved and fringed; the resulting riot of detail restrained by the underlying control exercised by these masters of geometric abstract design.

The Tuareg are fiercely independent nomadic people. On the move with their herds and camels over vast areas of the southern Sahara, they create an impressive world of traditional, functional objects from leather which is their primary material due to its durability, lightness and flexibility. Masters of geometric abstract design, the Tuareg fashion objects ranging from saddlebags to cushions to tent mats that are painted and molded, embroidered, engraved and fringed.

The Tuareg are fiercely independent nomadic people. On the move with their herds and camels over vast areas of the southern Sahara, they create an impressive world of traditional, functional objects from leather which is their primary material due to its durability, lightness and flexibility.

These mats are woven of straw decorated with dyed leather strips which form both a geometric pattern on the mat and a fringed border. The extremely heavy fringe on one mat suggests that it was woven for a chief.

These leather panels are photographed folded in half, approximately the way they were used. They can be stretched out flat, making them twice as long, with fringe at both ends. The underside is also leather but much plainer.

Leather aprons have been embellished with Kirdi beadwork and were probably used by the Kirdi, not the Tuareg.

In traditional Africa, shields were used not only as defensive weapons, but also as decorative or ritual objects filled with symbolic meaning. Although they can be carved from wood, woven, made from metal and other materials, most African shields are formed with animal hides, notably those from Ethiopia, the Maasai, the Wandala, the Dinka and the Sukumu.

Used to carry and store varied items, these covered baskets were carefully woven ( see interior of basket 1 ), then covered with leather on the outside and tied closed with leather thongs. Each has a leather carrying strap. Two are further embellished with silver tassels and filigree thus elevating these simple shallow containers from the functional to the stunning.

These beaded garments, made by and worn by women, were for ceremonial occasions. They defined one's status, progressing from girlhood to womanhood. The Jocolo, with it's five fingers, were reserved for married women, as were the Mapoto. Older aprons are on leather as opposed to canvas, have predominantly white designs and use smaller sized beads.