Divination Objects were used to communicate with gods, spirits and ancestors to understand or influence one's fate. Many African works fit that definition but our exhibit focuses on the Yoruba people of Nigeria. It includes many wonderful examples of their divination trays (opon Ifa) on which the sacred signs (odu) were traced, bowls (agere Ifa)which contained the 16 palm nuts to be cast, beaded bags (which carried tools and supplies) and tappers ( which were tapped to summon and greet the spirits). The quality of the pieces enhanced the diviner's status and inspired confidence in their skill. We also have several Kuba animal friction oracles and a Baule mouse oracle (gbekre) on display.

Divination (Ifa) is practiced to explain misfortunes and help to prevent them. The diviner, in consulting a diety, manipulates sixteen palm nuts, reads the patterns they form and marks the results on a divination board, opon Ifa, sprinkled with wood dust. The marks indicate verses that should be chanted as prayers. 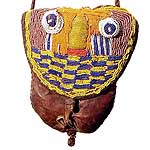 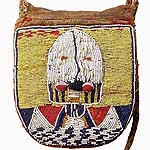 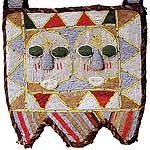 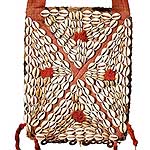 Used to carry divination objects and tools, the bags are worn in public ceremonies by Ifa priestesses and used and displayed in their homes. Beads were signs of wealth and status. The quality of the bags and other objects enhanced the diviner's status and inspired confidence in their skill. The beaded front lifts up to reveal a pouch on the back panel.

Divination tappers were used to summon and greet the spirits to the divination ritual.

These bowls are used to hold kola nuts as offerings of hospitality or as receptacles for the sixteen sacred palm nuts used in divination.

Rubbing or friction oracles are created in many forms. The best known are the itoom rubbing oracles of  Kuba and related peoples. These may take the form of animals such as crocodiles, warthogs, dogs, and others.