Please scroll down for links to images, sizes, prices and more information on each object featured in the current exhibit. Although most of the show is pictured here, there are several catalogs that are still being prepared and will be added shortly. Please check back.

For those of you who cannot visit the gallery, we present some views of the exhibition.

These large rectangular headdresses are danced principally at marriages. Featuring the head of a hare whose body takes the form of a box, the headdress is actually a sort of miniature stage on top of which an ensemble of figures, human and animal, performs a play.

Sogo bo, the puppet masquerade drama of the Bamana, is an exploration of the moral universe.
The relationship between men and women and the problems of domestic relations in polygamous households are important concerns of many Sogo bo performances. Conflict among co-wives is a popular theme in many stories and two of the main characters areBarabara, the Favorite Wife, and the Galomuso, the Bad Wife. Like folktales and other theatrical forms, these masquerade performances throw cultural values and social relationships into high relief and open them up for public scrutiny. The largest group of masquerade characters and the oldest performed in the theater are bush animals (see Bamana Animal Puppets).

The Egungun association honors spirits of the ancestors and invokes their protection or aid. These elaborate, colorful costumes combine traditional strip-woven Ashoke cloth with other varied textiles, including some that are printed or machine made velvet or lace. When performed the dancer climbs into the open top end until his feet fill the slipper-like form at the bottom. As he looks out through the rectangular mesh opening near the center, the top of the costume would fall down in back. The underside (when worn) of of the costume is made of Ashoke cloth that usually matches the Ashoke on the front.

These brightly painted igures were placed on altars in shrines or displayed at special ceremonies. Important individuals and ancestors were often displayed on horseback to support their status as great warriors or leaders. Several are depicted in colonial wear.

Sogo bo, the puppet masquerade drama of the Bamana, is an exploration of the moral universe. The largest group of masquerade characters and the oldest performed in the theater are bush animals. In Bamana communities, the bush is defined as the domain of men and the interpretation of the theater's bush animal characters are informed by beliefs and values associated with hunting and with hunters as men of action and society's heros. Over the last decades, at the same time that the actual area of uncultivated land has constricted and the number of hunters have diminished, the definition of the bush and the nature of the hunter/hero have been extended to other arenas of endeavor. In the Sogo bo theater, bush animal masquerades remain important precisely because they are richly drawn and complex metaphors through which to explore the nature of knowledge and power [and] the relationship of the individual to the group.

These large colorful masks are assembled from several pieces of wood, carved, then decorated with paint, metal and fabric. They were sometimes displayed on boat prows, since the Bozo fish on the Niger River. They are neighbors to the Bamana and Marka who also make masks covered in metal and/or paint.

The female form, so important in Baga art, manifests itself in various carvings including these small figures and the one large one supporting a bowl. The beautiful woman supporting her breasts is a representation of a young initiated woman. Such figures are placed on shrines.

Most Yoruba posts were support houseposts; this one was not, since when placed in the ground it would have been shorter and the top is finished off, not flat. Probably a commemerative piece, it was obviously meant to be seen from all sides.

Headdresses depicting bulls are used in ceremonies to indicate the age-grade status of the wearer.

In a special dance of rejoicing called Goli, symbolizing the social order, this mask, Kplekple, represents the junior male. It is among the most abstract of traditional African masks.

"Molo" masks are used by Bobo blacksmiths in initiation ceremonies.

These wide headdresses transformed the dancer into a supernatural being. They were used by the Do society at dances to promote fertility of the fields and at funerals of Do members. The geometric designs all have meanings. The black and white pattern symbolizes the separation of light from dark, good from evil, and female from male.

Ekon, an Ibibio men's association, uses puppets to parody village life and satirize the prominent members of the community.

Standing figures represent the numerous Igbo deities or ancestors. They are grouped together in symbolic families and are kept in special houses where they are revered. During annual festivities, these figures are taken out and paraded through the villages. The smaller yellow figures, showing modern dress and style do not represent deities and seem to have been fastened to a structure as puppet-like figures.

Special pieces from the Bamana, Urhobo, Fon, Bozo, and more.

The Temne,who are related to the Baga, live in small chiefdoms within Sierra Leone. Ruled by a central chief, they are socially regulated by secret societies such as the male Poro society and the female Bondo association. The animal headdresses often have removable horns or other features.

Wearing modern clothing or depicting Europeans, many Asante figures are referred to as colonial figures.

In traditional Africa, shields were used not only as defensive weapons, but also as decorative or ritual objects filled with symbolic meaning. Songye shields are all carved from single pieces of wood. The heads on the shields relate to the masks of this once warlike people from the Dem. Republic of Congo (Zaire) whose art projects an aggressive strength unparalleled in African art. 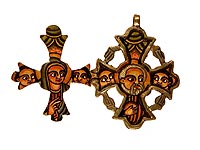 Ethiopia has been a Christian nation since the 4th century. These Coptic gospel texts are handwritten and illustrated on vellum, a fine parchment made from calfskin, lambskin, or kidskin. Although age is impossible to establish definitively, we believe they date from the 19th or early 20th century.

These large, horizontally worn masks, Banda, are used by the nearby and closely related Nalu people. The masks blend features of crocodiles, antelopes, sharks and humans in a very complex, Baroque style. They symbolically guard households, crops and even entire villages. They appear in harvest ceremonies.

The serpent, Kakilambe, is a protective spirit that presides over young men's initiation camps. It appears in the village on ritual days and to announce the return of the boys as men. Most versions, even the very large ones, were worn as headdresses.

The Baule are one of the Akan peoples. They moved west to the Ivory Coast more than 200 years ago and adopted masking traditions from their neighbors, the Guro, Senufo and Yaure peoples. Bo nun amuin, the sacred and fearsome bushcow/antelope men's masks, kept in the bush and hidden from women and children, show the serious and powerful potential of Baule spirits.

The Baule are one of the Akan peoples. They moved west to the Ivory Coast more than 200 years ago and adpted masking traditions from their neighbors, the Guro, Senufo and Yaure peoples. There are four basic types used in a special dance of rejoicing called Goli, symbolizing the social order, Kplekple, the junior male, Goli Glin, the senior male, Kpan Pre, the junior female ans Kpan, the senior female. This second type, a Goli Glin mask, representing the Senior male, is aqggressively complex and three-dimensionall. It has a strong, older nature spirit and takes the form of a bushcow, antelope and crocodile combination. They were painted red, symbolizing blood, danger and aggression. Women and children were not allowed to look at them closely.

Most Nupe art is abstract, with only some abstracted animals in relief on their doors and rare pots.
These gourds are old and well aged.

These large horizontal masks, composites of several animals, were called Kponungo, or "funeral head masks". Used by both Poro and non-Poro male societies, these helmet masks embodied an aggressive supernatural power to combat any forces that might disrupt the well-being of the community. The powerful features of antelopes, buffaloes, crocodiles, warthogs, hornbills, chameleons and humans combined to symbolize power and to recall important myths. They were used in anti-witchcraft ceremonies. Two are multi-colored.

The term "Firespitter" is used by outsiders because of how some of the masks were performed.

Gelede, a male association, uses the aesthetic power of sculpture, costume, song and dance to placate and please women, who have special spiritual power. Often with elaborate superstructures, the headdresses appear as identical pairs in the dances.

The works from the Epa association honor deities and cultural heroes at masked festivals. The large base heads, of deceased ancestors, are treated with less naturalism than the superstructure, which depicts and honors mothers with children, warrior/hunters, animals and rulers with their entourages in impressive sculptural form.

The Egungun association headdresses honor spirits of the ancestors and invoke their protection or aid. Many include elaborate, colorful costumes

These are the smallest and flattest of Yoruba masks and headdresses and have some fragments of their cloth costumes.